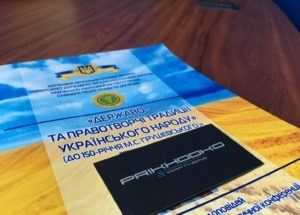 Andrey Prikhodko took part in the All-Ukrainian conference “state-law-creating and traditions of Ukrainian people”, carried out by the University of the State Fiscal Service of Ukraine.

Managing Partner «PRIKHODKO & PARTNERS» stressed that Ukraine’s Constitution enshrined the principle of democracy in Ukraine. According to Art. 5 of the Basic Law of the bearer of sovereignty and the only source of power in Ukraine is the people. The people exercise power directly and through bodies of state and local governments.

Power to the People – is the ability of each to influence the standard-setting process and normozastosovchi in the country. If interpret the concept of democracy in the context of the reform of anti-corruption bodies in Ukraine, it is an opportunity to everyone who is part of the Ukrainian public to directly influence the processes of creation and functioning of public authorities.

Analysis of the Laws of Ukraine “On Prevention of Corruption” and “On the National Anti-Corruption Bureau of Ukraine” gives grounds to assert truly reformist approach to the development of new anti-corruption bodies in Ukraine – National Anti-Corruption Bureau of Ukraine (hereinafter – NABU) and the National Agency for the Prevention of Corruption (hereinafter – Nazca). The immediate impact of the public realized through the establishment of public bodies exercising control processes establishment and functioning of these anti-corruption agencies.

Thus, in accordance with Art. 14 of the Law of Ukraine “On prevention of corruption” in the Nazca acts Public Council, which hears about the activities, performance plans and objectives latter shall make annual reports on its activities, provides the findings of the review of draft acts Nazca, delegates to attend the meetings of the Nazca his representative in an advisory capacity. Nazca prepare annual reports on their activities which, after approval of the Public Council published on its official website.

In order to ensure transparency and civilian control over the activities acquired, according to Art. 31 of the Law of Ukraine “On the National Anti-Corruption Bureau of Ukraine” Council acting public control, which is formed in an open and transparent competition. Council public control at NABU hear reports on the activities, performance plans and objectives, reports NABU consider and adopt its opinion on them, shall elect from its members two representatives who are members of the Disciplinary Commission NABU.

An important element of the reform of the constitutional and legal mechanism for combating corruption in Ukraine is the openness and transparency of these institutions to the public. Thus, according to ch. 2, Art. 21 of the Law of Ukraine “On Prevention of Corruption ‘associations, individuals, legal entities can not be denied access to information concerning the competence of carrying out measures to prevent corruption, as well as on the main directions of their activity.

Moreover, in the context of globalization and social communication processes, including substantial mutual exchange of information on the Internet, and positive innovation is to create informative websites and pages on social networks. NABU Nazca and actively report to the community about all the events, actions, plans, provides clarifying regulations refutes various kinds of provocative actions. By following newly created structures make it possible not only to provide a positive image of themselves, but also enhance public confidence.

The open question remains encouraging the public to reform the constitutional and legal framework to combat corruption. To reform process involved responsible citizens, in most cases – is non-governmental organizations (Transparency International, Center for Combating Corruption, “Our Money”, “knowingly”, “No bribery,” Anti-Corruption Committee of the Association of Ukrainian lawyers, etc.). These organizations operate at the expense of self-sufficiency and self-financing. There are positive trends in determining the status of plaintiffs corruption in law and guarantee their security and material interest. This is a draft Law of Ukraine “On Protection of plaintiffs and disclosure of harm or danger to the public interest.”

The public is a key element of reforming the constitutional and legal mechanism for combating corruption in Ukraine. And only create conditions under which every citizen will recognize the unacceptability of corruption and the need for personal participation in combat is an indicator of successful reform.