Andrey Prikhodko, took part in the Verkhovna Rada of Ukraine on Prevention and Combating Corruption. 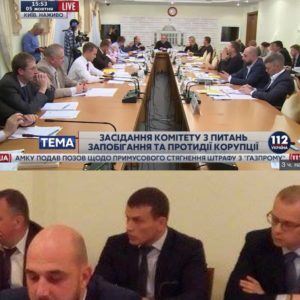 10.05.2016 the meeting of the Verkhovna Rada of Ukraine on Prevention and Combating Corruption (st. Sadova, 3rd conference room number 330). On the agenda, among other things, discussed the draft Law of Ukraine on protection of plaintiffs and disclosure of harm or threat to public interests (Reg. 4038 number, the subject of legislative initiative – deputies Ukraine Zalishchuk SP, Leshchenko S. A., and others).

During the meeting the said Committee, Andrey Prikhodko noted that the status of Corruption plaintiffs – a symbiosis of citizens and legal rights provided by the Constitution of Ukraine and special personality acquired by such person if exposing corruption and acquiring special status accuser in accordance with the anti-corruption legislation.

Vvykryvachi corruption as one of the components of the national mechanism for the prevention and fight against corruption should be one of the most effective. Despite the reform initiatives in insnuyuchyh law-enforcement agencies and the creation of new anti-corruption authorities (National Anti-Corruption Bureau, anti-corruption prosecutors, National Agency for the Prevention of korputsiyi), the state of corruption in the country is high. Law enforcement agencies today can not cover all aspects of life, economic and political spheres in which there corruption. This is not only the poor performance of law-enforcement orhnaha and yz participation of the citizens in corruption and the perception of it as a normal social process in Ukrainian realities.

In a memorandum to the bill states that the real protection plaintiffs can guarantee only a separate special law that would create an effective mechanism for distribution of social information. It is this tendency prevails past 15 years in the world – there are special laws in more than 30 countries, including Australia, Britain, Kosovo, South Korea, Romania, Serbia, South Africa and Japan. In countries in which plaintiffs law on the protection of information is more secure food, water – cleaner, taxpayers’ money is spent transparently and efficiently, but corporations act responsibly.

For example, in 2012, a year after the adoption of a special law on protection of plaintiffs in South Korea, the government returned to the budget of about $ 10 million as the result of 40 cases brought by plaintiffs of information. Due accuser information returned 35 billion US dollars in fines, lost and stolen taxpayer money since 1986.

That is why the accuser is the only reliable way to find out about abuses by the government. However, disclosing information if it shows the corruption or abuses by officials accuser at risk because they risk career, personal well-being and even lives to expose corruption and other socially dangerous acts.

The mentioned draft law expanded the definition of “accuser” because including The terms accuser is used in this sense – the natural person who on reasonable belief that the information is correct, disclosed or made confirmed by real actions attempt to disclose the damage or threat to public the interests of other persons, if such information became known to her in connection with her employment, professional, economic, social, scientific activities, passing her service or training or participation in the procedures provided by law that are binding for the start of this activities of service or training. However, the definition of “accuser” in this way is not entirely true, because if a person has received no information about corruption in connection with their labor, professional, economic, social, scientific activities, military service or training or participation in the envisaged legislation procedures that are required to start such activities, military service or training, such as accidentally received information about corruption, it is based on the definitions specified is not recognized accuser.

The absolute novelty is the provision of Art. 15 said the draft law, according to which if carried out as a result of disclosure of harm or danger to the public interest in the budget refund, plaintiffs paid remuneration in the amount of 10 percent vidpovernutyh funds.

The above rate is progressive in nature. For a number of anti-corruption and public structures pravatnyh existence of such rules in the legislation to provide the opportunity to receive significant funds, which can lead to some confusion. For example, if reports of the same fact in different accuser how zdiysnyuyuyetsya distribution payment of 10 percent and znovuzh do, just tell statement on corruption, whether to promote further actions for the purpose vstavnovlennya of crime and the actual refund to the budget or in case of detection of non withdrawal of budget funds and their return and offer undue advantage (Art. 369 of the Criminal Code of Ukraine) – there is no return of funds to the budget and its content by charging the amount being offered in state revenue.

However, the positive is that the bill is planned to install: safeguards to protect plaintiffs from unlawful dismissal, disciplinary proceedings, and other negative discriminatory measures and measures; Accuser rights (privacy and anonymity in the disclosure of harm or danger to the public interest, in damages, to provide security for information); guarantee transparency of information on cooperation with the accuser, the observance of their rights and protection.

The legislative initiative to define the legal status of plaintiffs in Ukraine yakokremoho institutional element of the constitutional and legal mechanism for preventing koputsiyi in Ukraine is clearly a positive step in the fight against corruption, but currently still needs some work.