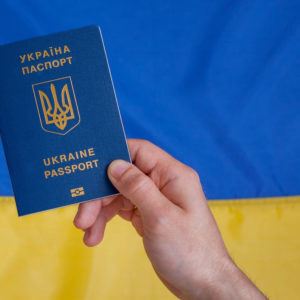 Persons residing outside of Ukraine apply for immigration permits to foreign diplomatic establishments of Ukraine at their place of residence.

The applicant submits an application for immigration permit in person to the relevant public authority. If there are valid reasons (applicant’s illness, natural disaster, etc.), the application may be sent by mail or on behalf of the applicant, notarized, submitted by another person.

For minors, as well as persons who are recognized as incapacitated in due course, the application for immigration permit is submitted by their legal representatives.

If one parent who is accompanied by a minor child is immigrating, he or she must file a notarized statement to the husband (wife) that he (she) does not object to the immigration of the children with the father (mother) . In the absence of such consent, the parent (mother) must file the decision of the relevant state body on leaving the children with the father (mother). The said decision shall be legalized by the consular post of Ukraine, unless otherwise provided by the international agreement of Ukraine.

Immigration to Ukraine is granted within the limits of the immigration quota. The quota of immigration is set by the Cabinet of Ministers of Ukraine in the order determined by the categories of immigrants:

1) persons of science and culture whose immigration is in the interests of Ukraine;

2) highly skilled specialists and workers whose acute need is tangible for the Ukrainian economy;

3) persons who have made a foreign investment in the economy of Ukraine in a foreign convertible currency in the amount of not less than 100 (one hundred) thousand US dollars, registered in the manner determined by the Cabinet of Ministers of Ukraine;

4) persons who are full-fledged brother or sister, grandfather or grandmother, grandson or grandson of citizens of Ukraine;

5) persons who have previously been citizens of Ukraine;

6) the parents, the husband (wife) of the immigrant and his / her minor children;

7) persons who have resided continuously in the territory of Ukraine for three years from the date of granting them refugee status in Ukraine or asylum in Ukraine, as well as their parents, husbands (wives) and minor children living with them;

8) persons who have resided continuously in the territory of Ukraine for three years from the date of establishing the status of a person affected by human trafficking.

1) one of the spouses, if the other spouse with whom he has been married for more than two years is a citizen of Ukraine, children and parents of citizens of Ukraine;

4) persons whose immigration is of state interest to Ukraine;