HOW TO RETURN PROPERTY SEIZED DURING A SEARCH? 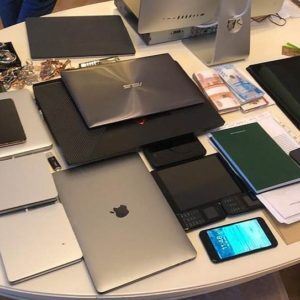 You can expect or not expect people to come to your office or apartment with the intention of conducting a search, but you should always understand that law enforcement officers appear for the sole purpose of finding and removing anything that may even remotely resemble a thing or document involved. to the criminal offense, and then in the course of the case to understand whether it was necessary to remove it or not. Therefore, be prepared that law enforcement officers will “rake” all the property they want during the search.

Thus, all the property that law enforcement officers can seize in your office, apartment or other premises is divided into two categories:

However, investigating judges often note in the search warrant vague wording of the list of property that may be seized.

How should a business behave during a search?

The correct behavior after a search depends on your awareness of possible scenarios.

Thus, after a search, law enforcement officers have two options for dealing with temporarily seized property: to apply to the investigating judge with a request to seize the property or return it to you. It is logical that the investigator / prosecutor does not seize the property in order to return it to you immediately, so you should expect the seizure of the seized property. From the day of the search, the deadlines that are important to follow begin to expire: law enforcement officers have 48 hours after the seizure of property not specified in the court order to apply to the investigating judge with a question about the seizure of property.

If law enforcement officers do not apply to the court for the seizure of the property within 48 hours or do apply, but the investigating judge refuses to seize the property, the property must be returned immediately to the person from whom it was seized.

Of course, the manipulation of law enforcement officers is already a well-established practice, so it is useless to hope that your property will be returned to you after 48 hours or after the investigating judge refuses to seize your property.

If the investigator / prosecutor does not respond to such methods at all and continues to illegally hold your property, a disciplinary complaint against the prosecutor for a disciplinary misconduct that fails to perform or improperly perform his or her duties may be an effective remedy.

If law enforcement officers still went to court within 48 hours, and the investigating judge seized the temporarily seized property, then I offer you two ways to return the property:

When going to court with an appeal, it is important to adhere to deadlines, which depend on whether you were present at the hearing on the seizure of property.

If you were present at the court hearing, you will be able to appeal the seizure of property no later than 5 days after the announcement of the court decision.

Usually, property owners are not summoned to participate in the consideration of the seizure of property, so in this case you can appeal the seizure no later than 5 days after receiving a copy of the court decision on the seizure.

Not all owners of temporarily confiscated property have to apply to the court with a request to lift the seizure, but only those who were not present during the consideration of the law enforcement request to impose it.

As already mentioned, it is a typical situation that property owners are not summoned to court and their property is seized without their participation, so this way will balance your rights.

The main advantage of this method is the lack of time to submit such an application. That is, you can use it when you missed the deadline for appeal.

Ukraine will be searched according to the new rules

Satisfying your appeal or requesting the lifting of the arrest will oblige law enforcement to return the seized property. As described above, the obligation to return property does not always affect law enforcement effectively, so how to act in this case – see Scenario 1.

In general, there is a disappointing trend that you will have to fight for your own property: it is confiscated by law enforcement officers, although they have not been given permission to do so, and then you still need to make efforts to return it.

However, I hope that this article has clarified to you the possible ways to return the property seized during the search.

Despite this, the work of a lawyer as a specialist will never be superfluous, but will also save you from wrong steps on the way to returning your property and saving precious time.