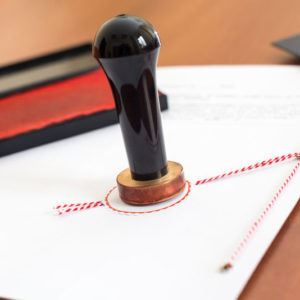 According to the second part of Article 3 of the Convention, which cancels the requirement of legalization of foreign official documents (the Hague Convention), observance of the procedure for placing apostilles can not be required by States parties to the Convention if there are agreements between two or more states that cancel or simplify the procedure or liberate itself. document from legalization;

Information on the application of international treaties of Ukraine on legal aid, insofar as it relates to the cancellation of the requirement of legalization of official documents issued by the competent authorities of the Contracting Parties, is contained in a letter of the Ministry of Justice of Ukraine dated May 11, 2010 No. 26-26 / 291.

Apostille is placed on official Ukrainian documents by authorized agencies only on the territory of Ukraine.

The procedure for consular legalization of official documents is established by the Vienna Convention on Consular Relations of 1963, international treaties and current legislation of Ukraine.

Legalization in the established procedure of the document gives him the right to exist in international circulation.

Legalization is not subject to:

– documents and acts that are in conflict with the laws of Ukraine or which, in their content, may harm the interests of Ukraine, or contain information that defames the honor and dignity of citizens;

– documents issued by bodies and officials in excess of their authority.

If there is any doubt that the documents submitted correspond to the laws of Ukraine or the host state, the consular officer has the right to apply to the competent authorities of the respective state or to the relevant authorities in Ukraine according to official explanations.

– Individuals submit a document certifying a person, and an application for consular legalization;

– legal entities submit a letter of request regarding the commission of a consular legalization.

In case of submission of an application by the representative of an individual or legal entity an order or other document confirming the authority to act on behalf of these persons is submitted.

The procedure for legalization of official documents abroad

The foreign diplomatic institutions of Ukraine accept official documents, drawn up and certified on the territory of the receiving state or the consular district by state authorities, whose competence includes the procedure for consular legalization, for their further use in Ukraine.

The official documents, drawn up and certified in Ukraine and not previously certified by the Department of Consular Service of the Ministry of Foreign Affairs of Ukraine, are not subject to consular legalization.

The foreign diplomatic institutions of Ukraine have samples of signatures and stamps of officials of state bodies that are members of the consular district of the receiving state.

A consular officer certifies official documents only after verifying their compliance with international treaties of Ukraine, the current legislation of Ukraine and the country of residence.

In case of a consular officer having doubts about the legal validity of the submitted document, its registration, etc., it may apply for clarification to the state authorities of the host country, in consultation with a lawyer, the Department of Consular Service of the Ministry of Foreign Affairs of Ukraine.

– Individuals submit a document certifying the identity, and an application for consular legalization;

– legal entities submit a letter of request for the execution of consular legalization.

In the case of filing an application, a representative of a natural or legal person shall submit a power of attorney or other document confirming the authority to act on behalf of these persons.

Consular fees are being paid for consular legalization.